Step by step, Bp Williamson is moving us closer to Rome

In the last Eleison Comment released Sunday 30 August 2015, Bp Richard Williamson writes : So if the SSPX cannot be brought by Rome to abandon dogma, or rather to undermine all Catholic dogma with the Masonic super-dogma that all dogma is mush, then the SSPX is bound to act within the walls of Rome like a Trojan horse. That is why the Cardinal will insist on a preamble, whether written by Rome or by the SSPX is of no importance, so long as the mass of Traditionalists, just like the mass of Catholics after Vatican II, will let themselves be deceived by the doctrinal ambiguities. Brilliant these will be.

By these words, Bp Williamson, great admirer of the satanist esoteric poet T. S. Eliot which was member of the Golden Dawn (see this article), helps Bp Fellay and Pope Francis to prepare traditionalist people's minds to an agreement with Rome without any doctrinal preambule.

Bp Williamson introduces again in the Resistance and in the catholic Tradition the idea that an agreement with Rome without any doctrinal written preambule would not be dangerous for us, but for the Roman freemasons, while it is of course exactly the opposite : an agreement of the sspx with Rome with or without any doctrinal preambule would not mean death for modernist freemasons but for catholic Tradition. It would be a great victory for freemasonry (but not the final victory, of course, because we know that Our Lord Jesus Christ is stronger than Lucifer). Why such an agreement would be a victory? Because in both cases, it would establish that traditional Catholics recognize the authority of a heretic pope, while Saint Paul, Saint Vincent of Lerins, Saint Thomas of Aquinas, saint Ireneus of Lyon and many other Fathers of the Church teach us to anathematize heretics and to live entirely separated from them (see the nullam partem tab).

A trap for the SSPX :
Bp Williamson is leading the Resistance and the whole catholic Tradition in a trap. Conservative people from the sspx read his Eleison Comments. If Bp Fellay decides an agreement with Rome without any written doctrinal document, these conservative people will think that such an agreement is good because Bp Williamson told them it was good. They will even think that Catholic Tradition is very smart and will reconquer Rome, because Bp Williamson thinks that a sspx recognized by Rome without any written doctrinal agreement would be a Trojan horse inside of the modernist Rome...

And what about Bp Faure?
Bp Faure is not better than Bishop Williamson because he always agrees with him and because he had an ambiguous position about our relations with Rome. In addition, during his visit to France shortly after joining the Resistance, he did everything possible to prevent any reaction, repeating the faithful during the meetings that they had to  follow in everything Fr de Cacqueray and do nothing without his permission. Far from stimulating the Resistance in France, Bp Faure considerably diminished its strenght.

Bp Williamson and the novus ordo mass :
Last July, Bp Williamson had already made the news in the Tradition because on 28th June 2015, he said in a conference given in Mahopcac, New York  :

Minute 8:56 : “There are cases when even the Novus Ordo Mass can be attended with an effect of building one´s faith instead of losing it” 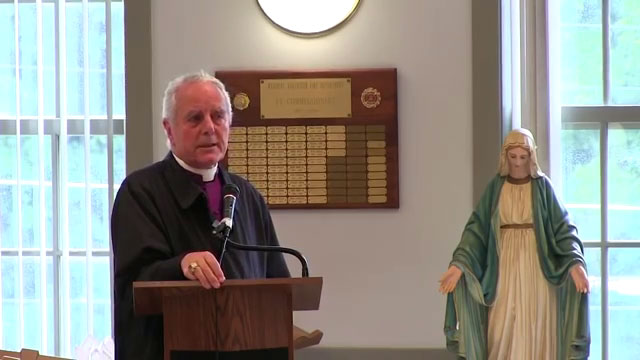 Minute 9:53 : “Be very careful, be very careful with the Novus… stay away of the Novus Ordo, but exceptionally… if you´re watching and praying even there you may find the grace of God, if you do make use of it in order to sanctify your soul” : 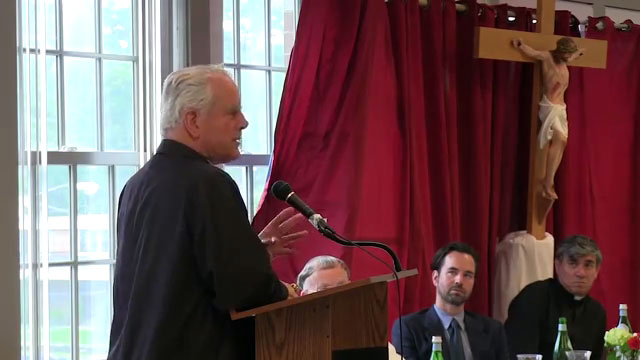 Minute 10:37 : “Therefore, I would not say every single person must stay away from every single Novus Ordo Mass” 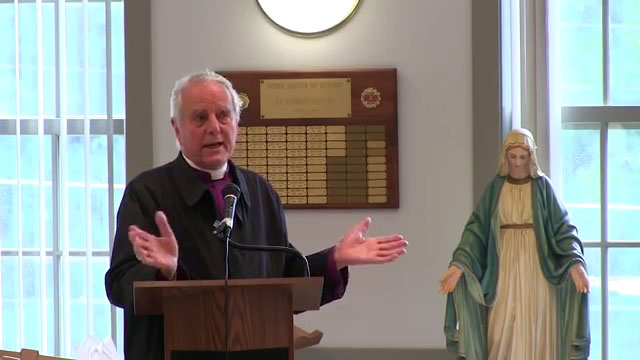 Dr. David Allen White, Fr Zendejas, the Dominicans of Avrillé (Fr Marie-Dominique O.P. and Fr. Angelico O.P) were there. They said nothing. It was not suprising from Dr White which is a great admirer of T. S Eliot, too. But it was not normal at all that Fr Zendejas and the Dominicans did not react. 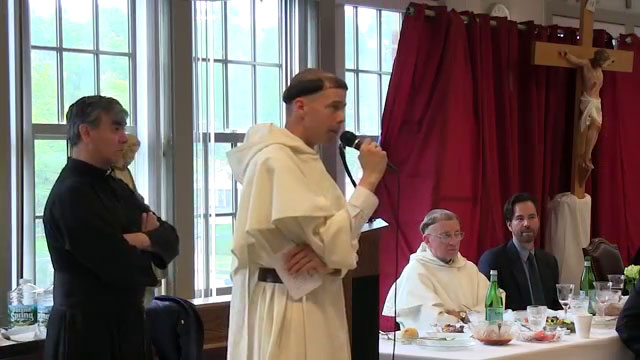 If sometimes the Novus Ordo can nourish the faith, it means that the Novus Ordo's heresies can sometimes be good for the soul if the priest is pious. This is completely false and very dangerous to say that. It is in full opposition with what has been taught to us by the sspx for forty years. Such a statement is opposite to the catholic faith which teaches us with Saint Paul :
Gal. I, 7-9 " Which is not another, only there are some that trouble you, and would pervert the gospel of Christ. But though we, or an angel from heaven, preach a gospel to you besides that which we have preached to you, let him be anathema. As we said before, so now I say again: If any one preach to you a gospel, besides that which you have received, let him be anathema."

Saint Paul teaches us to be separated from those who have not the same faith. Because anathema means "separated, cut from". It is Saint Thomas who explains that by quoting the second Concile of Constantinople. This quote from the Golden Chain is very important and will be very useful in the future :
catena aurea, commentary of the gospel of Saint Matthew, chapter XIV, v. 13-19 :
"Second Council of Constantinople, Concil. Con. ii. Collat. 8: How is it that some do presume to say that these things are said only of the living? Know they not that the sentence of anathema is nothing else but separation? They are to be avoided who are held of grievous faults, whether they are among the living, or not. For it is always behoveful to fly from the wicked. Moreover there are divers letters read of Augustine of religious memory, who was of great renown among the African bishops, which affirmed [margin note: see Aug. Ep. 185, 4] that heretics ought to be anathematized even after death. Such an ecclesiastical tradition other African Bishops also have preserved. And the Holy Roman Church also has anathematized some Bishops after death, although no accusation had been brought against their faith in their lifetime.

The modernists do not preach the same faith (see "Pope Francis" and "Pope Benedict"'s categories, on the the right side of this blog). Let us remind, for example, that Pope Francis taught us that studying the Coran was good for souls! (cf. this bilingual French/ English video). It is clear and sure that the actual pope would be declared anathema by saint Paul. Same for all the priests and bishops who support him in his heresies... So we cannot go to a mass celebrated by priests who would be declared anathema by saint Paul.

So if he was faithful to the secular teaching of the Catholic Church, Bp Williamson instead of teaching us that sometimes, Novus Ordo people or Novus Ordo protestantized masses can nourish our faith, would on the contrary anathematize the Novus Ordo and teach us with Saint Paul and Saint Thomas of Aquinas that we have to stay entirely separated from them. This bishop shows us again that he is not trustable any more and that we must separate from him because he has a dangerous doctrine.

Let us also remind of the catastrophic conference of Postfalls, given the 1st June 2014, where Bp Williamson said : "If, by some miracle, Pope Francis rang me up next week and said : “You Excellency, you and I have had our divergences, but right now I am authorizing you to found a society. You go right ahead for the good of the Church.”
-“Holy Father, can I have that in writing? Do you mind if I come to Rome and get that with your signature?”
-“Yes, of course”.
-"Allright, then I’d be on the next plane to Rome. I’d be on the next plane to Rome!"
But without that, “up a creek without a paddle”. And it is not a solution."

We have already warned about the danger of this conference here.

Moreover, from a pragmatic point of view : " it is not the subjects that make the superiors, but the superiors who make the subjects." But this argument from Abp Lefebvre is not the main one. Our main arguments should be doctrinal and theological. One of the main theological argument is that to be accepted and recognized by people who accept at the same time all the religions in the Pantheon of Assisi is to agree to put the only true and holy religion on the same level as the other religions which are from the devil :

- Conference between Luther and the devil 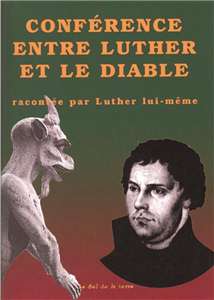 Can we submit to a pope who honors false religions without thereby betraying our catholic faith?
No. Indeed, this attitude of submission to the Pope would be a de facto recognition of the value of the doctrinal judgment of a heretic, and thus the doctrinal approval of this heretic. It would betray Jesus Christ.

Here are some other quotes showing that we must flee from Rome as long as the Pope and the Cardinals do not defend the true faith:

- Saint Paul : Romans XVI, 17 :
Now I beseech you, brethren, to mark them who make dissensions and offences contrary to the doctrine which you have learned, and avoid them. For they that are such, serve not Christ our Lord (...)

[Note :
(1) Nor say to him, God speed you: This admonition is to forewarn the faithful of the dangers which arise from a familiarity with those who have prevaricated and gone from the true faith, and with such as teach false doctrine. But this is not forbidding a charity for all men, by which we ought to wish and pray for the eternal salvation of every one, even of our enemies. That is why we must pray for the conversion of all freemasons but we must not accept to be recognized by them.]

- A man that is a heretic, after the first and second admonition, avoid. Tit. III, 10.

– “Avoid the heretics; they are the successors of the devil who seduced the first woman”- (St Ignatius of Antioch)

– “Flee the poison of heretics!” (St. Anthony the Great)

– “Do not sit with heretics” (St Ephrem)

Saint Vincent of Lerins clarifies :
- “The Apostle commands this intransigence to all generations : must always be anathematized those who have a doctrine contrary to the received doctrine”.

It is why Don Guéranger writes to Bishop d’Astros:
– “One of the means to preserve faith, one of the first marks of unity, is the flight from heretics”.

Whatever be the agreement (sspx-Rome or Resistance-Rome -- written or oral -- pragmatic or doctrinal), it would be a dangerous and bad agreement until Rome is not fully converted. We must separate from the conciliar Rome until it is not fully teaching the catholic faith. Pope Francis must first condemn the Second Vatican Council, the novus ordo mass, the new code of canon law, homosexuality, laicism etc . The nullam partem position is the only true one until Rome is not converted. It is the only position which pleases God.

For the moment, it is better to have no bishop than to have dangerous bishops like Bp Williamson or Bp Faure who always agrees with him and who is one of his best friends. Jesus, our All-powerful God is in control of everything. We do not have to worry. He will give us the appropriate graces for these exceptional circumstances. For those who love Him, Our Lord always organize things in the best way for them : first, we have to keep the true faith and then we will have a good Bishop when God decide it is necessary and good for us : "Seek ye therefore first the kingdom of God, and his justice, and all these things shall be added unto you." Matt. VI, 33.