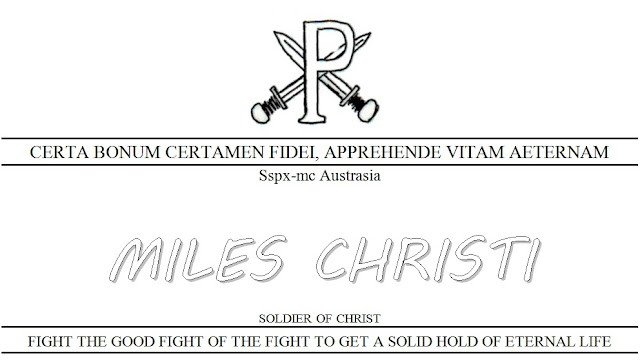 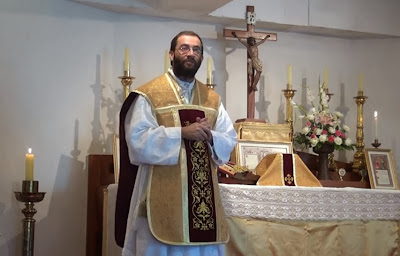 The classical attitude of traditional Catholics sliding back towards the is to clamour that they are not sedevacantists, to justify their liberal slide, and to accuse those who resist the slide to be sedevacantists:
●One of the main arguments of Bishop Fellay to justify the text of the April 15th 2012 Declaration is his desire to be “above the sedevacantist temptation (which we tried to rule out in this Doctrine Declaration)” [Cor Unum 104, March 2013, p. 38].
●Then comes the punch line (sermon of Fr Couture, published in the weekly bulletin of OLVC, vol. XII, No17, p. 4).

And now we have the group calling themselves the ‘resistance’, those who have been expelled from the Society of St Pius X recently. They also offer the traditional mass, but now they are openly saying that people should not go to the Society of St Pius X masses, under the pretext that the Society of St Pius X would have become modernist and liberal, just like the Novus Ordo Catholics. I let you judge for yourselves the truthfulness of the accusation. One serious danger of these priests is that they are so vocal about the problems in the Church and with the present popes, they so easily use all kinds of names, that, if they themselves refuse the accusation of being sedevacantists, they lead their faithful to it. When you hear all the time that the pope is a bad pope, it is easy to eventually think, “but then, how can he be a true pope”, and from there to conclude that he cannot be pope, is only a step away. One of their families has already become sedevancantist and now this family even rejects them.

This accusation was repeated again in India (and possibly other places) and reminds me of the first threat I received last year “If you postpone an agreement with Rome, you will end up being a sedevacantist”. Note well: To criticise often Pope Francis is just one step away from the abyss! Poor Archbishop Lefebvre, who said bad things about new popes so many times!
●Other priests accuse us of being schismatics, using the ignorance of simple villagers both in Dagohoy and in Hindang.

So what do we say?

We cannot claim to be faithful to the Doctrinal position of our Founder if we support sedevancantism. The reasons that motivated his choice then have not changed. Sedevacantism is a pandora’s box, just like liberalism, it gives a simple and logical solution to the crisis in the Church, but opens a flurry of questions impossible to answer without falling into confusion, absurdity or division (who is the pope then? If there is no pope at all how will the pope return? Why is our Lady talking about good and bad popes? Where is the hidden Pope Gregory XVIII or Benedict XVII? What happened to the real supposedly good Pope Paul VI? Who is right between the Dolanites and Sanbornites? Why did error in the faith not “unpope” previous popes? How is the papal going to restart without valid cardinals? Etc.)
For all these questions and plenty more, like the minimal visibility of the Catholic Church, the Archbishop left the reality of a pope with no faith, (believing that all religions are true and good, like the Freemasons) to its own state: A mystery.
That mystery will be solved later, at the end of the crisis. Our duty is simple: To remain Catholic. The rest is beyond the capability of priests, and way beyond the capability of faithful who do not have even the time to find out who is right between Cajetan and Bellarmine….
Most popes and theologians don’t consider the possibility of losing the faith, even after La Salette (“ will lose the faith….”). The conclusions of those fewer who do consider that possibility do differ, and for those who conclude that in that case the pope would not be pope, they do not tell us how he would be deposed or how Catholics would be officially notified that he is not Pope.
Sedevacantists then are obliged to twist what theologians say to make a seemingly erudite and impressive list of theologians agreeing with them, precisely when it is not the case (Cajetan) or when that author gives his opinion under the note of probability (Tanquerey).
They also argue that their thesis is most obvious and necessary. Why then did it take them so long and so many complex reasoning’s to come to it: The ‘Thesis of Cassissiacum” came 20 years after the accession of John XXIII, an invalid pope according to them. For 20 years, the Catholic Church had no pope and nobody knew about it, except a few clowns in !
Therefore, my dear friends, don’t believe those who try to scare you, as the liberals within the XSPX go leftwards, they need to accuse those who don’t deviate to go to the extreme right. They even claim that we made the poor Ng family in , sedevacantists. I never really talked to them until July 2012, and by then they had lost trust in the SSPX because of the liberalism of some priests on the issues of doctrine, family planning, modesty etc., that led a mistrust of the position of the Archbishop. But this I confess, is that I was not able to prevent them to sink further and become house church, being too clumsy or coming too late.