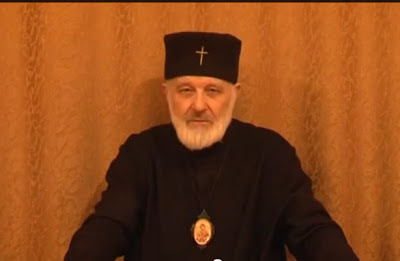 
maybe today, maybe in the next few hours You will elect a new Pope. Mass media manipulated both You and the common people before the election into electing a Pope who will have nothing in common with Christ, with the Spirit of truth and repentance or with the saving faith. Owing to Your heresies, the Mystical Body of Christ has almost bled to death. It only remains to destroy the last remnants of sincere priests, religious and faithful, to remove the last sound principles and to implement such that will complete total destruction. And then to conduct a funeral. You, along with the new Pope, are now mere gravediggers of the Church. But “the gates of hell shall not prevail against it” and the tombstone will be rolled back. Christ is risen! The living Church will live in the catacombs as it was at the beginning of the Church. The official structure has become a harlot of antichrist drunk with the blood of the saints, killing the true faithful and blaspheming God.
We ask: Who from among the Cardinals is aware of the catastrophic crisis, both internal and external? Which of the Cardinals is able not only to offer a true vision of a reform of the Church but also to stand against the spirit of neopaganism even at the cost of death like the Apostles Peter and Paul who shed their blood for the sake of Christ in Rome? Who among the Cardinals present in the conclave has the same Spirit as St. Paul or St. Peter? He who wants to reform the Church must long before reform himself by true repentance and by following Christ.

Let us point out that the Bishops’ Synod of the UO GCC and the Byzantine Catholic Patriarchate declared an anathema – God’s curse – almost on all of You who are in the conclave. Why? Because You betrayed Christ and the essence of His Gospel and God placed a curse (anathema) on You according to Gal 1:8-9. The fruit of heresies and of the spirit of Assisi is gender homosexuality and paedophilia. The reality is that Benedict XVI was accused of crimes against humanity because he was silent on paedophilia and de facto approved of it. “Blessed” John Paul II is as much guilty of crimes against humanity. He covered up paedophilia, permitted heresies and opened the Church to the genie of Assisi.

On 1 May 2011, at the hour of “beatification” which de facto confirmed new heretical teachings with the spirit of the New Age, the Byzantine Catholic Patriarchate separated from the Vatican and declared God’s anathema – excommunication and curse – on Benedict XVI and John Paul II according to Gal 1:8-9. The fruit of the curse could be seen even before the declaration of anathema. Christian Europe accepted the anti-Decalogue of the Lisbon Treaty, including the promotion of homosexuality, and this moral devastation was embraced by USA as a priority of their foreign policy. Gender ideology destroys all moral, spiritual and Christian values. Child kidnapping by the juvenile justice system and demoralization and demonization of the kidnapped children is the fruit of this curse too.

What is the solution? “Unless you repent, you will all (all of You who take part in the conclave) perish.” (Lk 13:3)

How are You to repent? By annulling the invalid beatification of John Paul II and making a public act of renouncement of heresies and the spirit of Assisi. If You do so, God will give You the light for the next steps. If You do not, the official Catholic Church is no longer the Church of Christ, but a harlot of antichrist.